Portal to the Lesser White-fronted Goose

Effective and targeted research is necessary for effective conservation. A longtime commitment to research on the Lesser White-fronted Goose has led to insights that will hopefully bring the Fennoscandian wild population back from the brink of extinction. Efficient surveys and monitoring on sites have given data on numbers, trends, survival and mortality. Also research on diet, genetics and habitat use has proven important. However, much more is needed in the struggle for the species survival in a world with ever increasing habitat destruction, over hunting and poaching, and not to forget the dire consequences of climate change that has started to show.

So far one Dr. thesis has focused on the LWfG. The thesis Phylogeography and conservation genetics of the Lesser White-fronted Goose (Anser erythropus) has contributed a lot to the understanding of the ecology of the LWfG. This and several master thesis’s can be downloaded from the literature page.

In China, much research has been carried out recently on the wintering birds originating from East Russian breeding areas. The work led by  Lei Cao, University of Science and Technology of China, has showed that the Lesser White-fronted Goose numbers have declined greatly in Anhui, Jiangxi and Jiangsu Provinces between the late-1980s/early-1990s and recent years: the species’ range has contracted to East Dongting Lake in Hunan. The relatively stable numbers at East Dongting Lake suggest that the population is not currently threatened, but the extreme concentration at one lake makes the species vulnerable. Lesser White-fronted Geese rely on very specific meadow vegetation exposed after water recession, so changes in water levels or recession timing, due to hydrological changes following the commissioning of the Three Gorges Dam, may have negative effects. Thus, it is critically important to understand the wintering ecology and habitat needs of this threatened species at East Dongting Lake. It is also essential to conduct further synchronous Yangtze River floodplain surveys to assess the current status, distribution and habitat use of Lesser White-fronted Geese throughout the region. 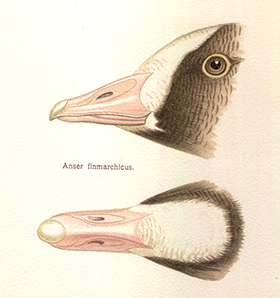