Portal to the Lesser White-fronted Goose

The currently known breeding sites of the wild Fennoscandian population are situated in northernmost Norway, but single pairs may also breed in the northernmost parts of other Nordic countries (Finland, Sweden). The Nordic breeding population was in in 2009 estimated at only approximately 20 breeding pairs and there has been a sustained, statistically significant, negative trend in the population in the period 1990-2008. This continued a long-term decline, from an estimated 10,000 individuals in the early 20th century. However, during the latest years when a culling program of red foxes in the core breeding area was implemented (green bars - 2008-2019), the decline seems to have been discontinued, and an increase in the numbers has been observed as monitoring data from the Valdak marshes in Norway reveal (chart below). 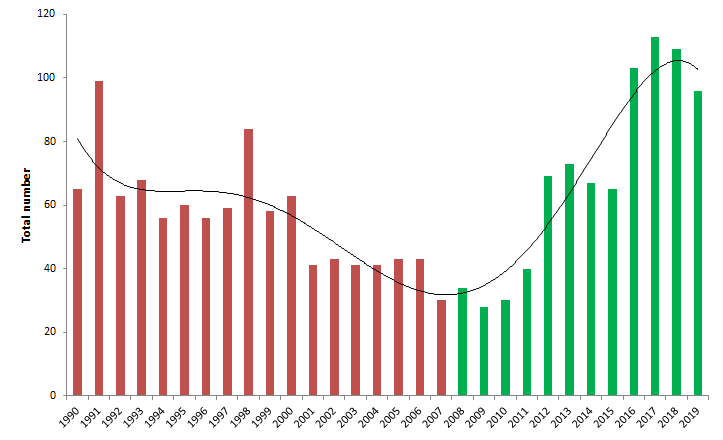 In Sweden, the latest confirmed breeding observations of the original wild population in Sweden were made in 1991. Footprints of adults and young were seen at a suitable locality in 1996, and a male showing breeding behavior was seen in the same area in 1998. All other records seem to emerge from the reintroduced/restocked population.

In Finland, nesting was last confirmed in 1995, though birds continue to be reported close to potential breeding areas virtually annually.

Satellite tracking has shown that non-breeding and failed breeding birds from the small Fennoscandian population undertake a moult migration eastwards to the Kanin Peninsula, Kolgujev Island and even as far as the Taimyr Peninsula in northern Russia. These then subsequently migrate south-east along the Central Asian migration route all the way to the wintering area in Greece. Successful breeders moult in the breeding grounds, and then gather at the Valdak Marshes (Finnmark, Norway) before starting on the autumn migration eastwards to the Kanin Peninsula. There is subsequently a migratory divide, with most birds heading south-west, presumably through Russian Karelia, Baltic States, Poland and eastern Germany, and then south-east, via a major staging areas in Hungary (Hortobágy) and Greece (Lake Kerkini) to wintering grounds in north-east Greece (Evros Delta), adjacent to the Turkish border. There is also evidence that the birds visit the Turkish side of the Evros Delta and possibly also other sites in westernmost Turkey in cold periods during the midwinter. Other birds migrate from Kanin Peninsula south-eastwards, crossing the Ural mountains, and then turning south following the Ob valley to north-west Kazakhstan and onwards along the northern coast of the Black Sea presumably to the same wintering areas in Greece as is used by the rest of the Fennoscandian population. 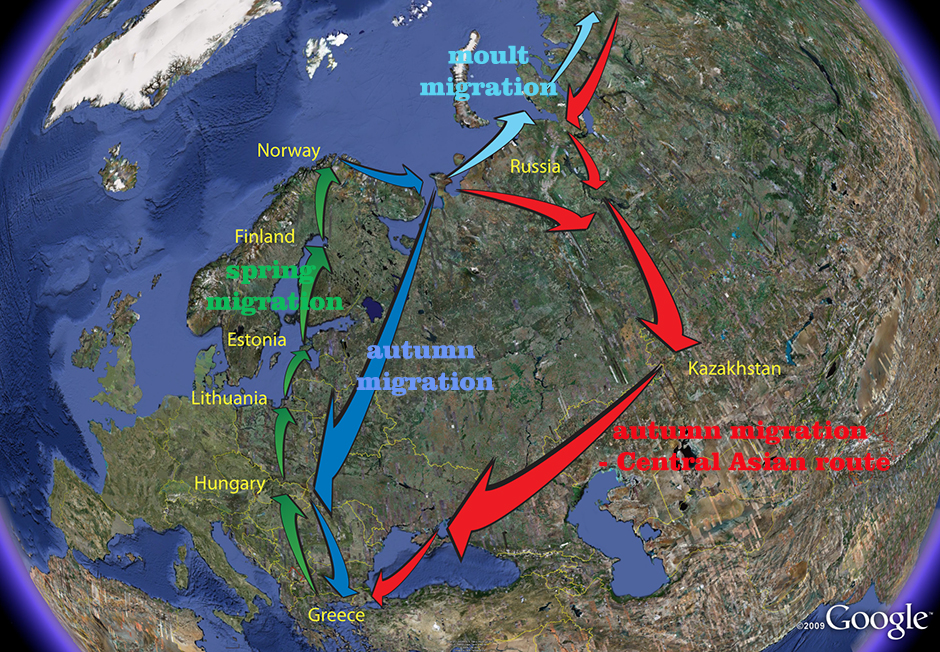 In addition to the wintering sites Lake Kerkini and Evros Delta in Greece, and the regular autumn and spring stopover site in Hortobàgy, Hungary, known spring and autumn staging areas around the Baltic Sea and close to the breeding/moulting grounds are now monitored on a regular basis. Important spring staging sites in the region include the Nemunas Delta, Lithuania (revealed by satellite tracking in spring 2007), Matsalu and Silma, Estonia, the Bothnian Bay area, near Oulu in Central Finland and the Valdak Marshes, Porsangen Fjord, Norway. The major gathering site before autumn migration for the Fennoscandian LWfG that are not undertaking the moult migration eastwards is the Valdak Marshes.

This animation will be updated as the monthly data are added to the database.

This animation also shows data for the Western main population as they pass through Kazakhstan in autumn down to Azerbaijan.